Often I have wondered, “How could America fall to globalism? Or worse, Islam?” (Which would be worse, damn good question.) We have macho race car drivers, rodeo cowboy studs, can-do-anything-farmers driving big tractors, endless huge corporations, a powerful military, and lots of kick-ass women to back up their men.
We have a lot of ego-type power here saying, “Can’t happen here—let’em try it!”
So, how could it possibly happen here?
Folks, it’s happening.
After 9/11 the world came to America’s aid and cried with us, and President Bush came to know the terrorists were hiding in Afghanistan, so sent in the big guns.
President Bush did something else too. He supported the Muslims. He said, “We respect your faith.” “Islam’s teachings are good and peaceful.” What a dunce. The suit and skirt-wearing jihadis fed him only the good parts of the koran and he bought it. Why wouldn’t he? And why wouldn’t he believe them? Who else did he have to ask? Daddy was no help.
(Sorry, George Junior, I still mostly like you.)
(Originally I wrote this [9-20-17.] Since then we have discovered some things about daddy Bush [HW] and that info is not meant for this post.)
He (meaning George Jr. again) said more during a speech to Congress. He looked and sounded so sincere…I tend to believe that he believed what he was saying. I also believe the elite of the new world order had him in its clutches right then. If he was told what to say by important and elite men I think it was easy for him to believe it. In other words, how could a whole faith, a whole religion, be blamed for 9/11?
(That is looking at the world through rose-colored glasses, folks. No, of course not, EVERY common Muslim can not be blamed. It’s the Islamic leadership telling the billion and a half people they hold in ideological slavery what to do–and that is, “Invade the Western nations and change them by any means possible.”)
The first person I heard utter the words “…new world order…” was George’s daddy (HW) the senior President George Bush. At that time it sounded really, really, good—I mean, who wouldn’t want more “order” in the world?
So after 9/11 began the true welcoming of Muslims into our country, most importantly into our schools and our government, right into the White House as advisers on how to defeat the “radical” Islamic terrorists. We now know—at least some of us—that radical is a misnomer. There is no such thing as a radical Muslim just like there is no such thing as a moderate Muslim.
As Turkey’s Erdogan says, “Islam is Islam. There is NO moderation.” 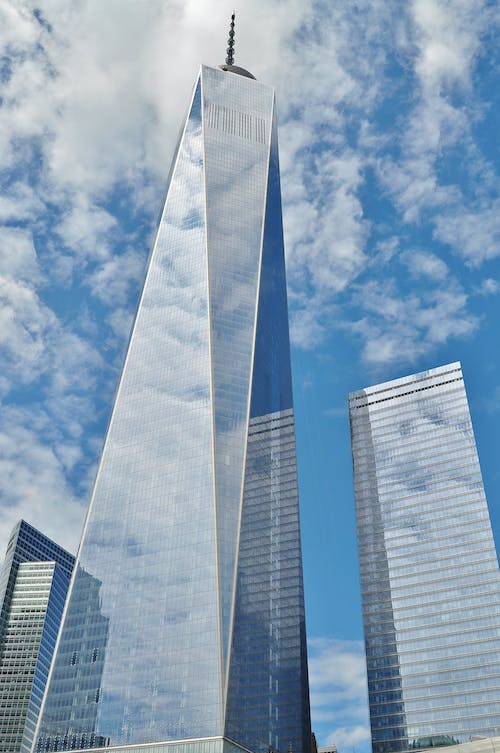 The people who planned 9/11 probably salivate when they see a building like this; they dream of how bringing this building down would further their agenda.

To get back to how America could fall to Islam.
First, know that Muslims do NOT flee their countries looking for a better life. Basically they are ordered by their leadership to invade all countries and make them Islamic. Why? Because Muslims MUST dominate and Muslims consider themselves superior to non-Muslims. In Western Europe, Australia, Canada, America, there are mass amounts of people who refuse to wake up and believe that Muslims don’t just need a hug.  then they would be glad to become regular, decent, citizens. Unfortunately, hugging just won’t do. They are here to invade–not immigrate and peacefully assimilate–but to take over.
It’s one innocent-appearing event at a time. If a law appears, or a rule changes…well, American people tend to question it—but not loudly—and likely will not make their voice heard at all. They will end up accepting the change as not too bad and go on living their life as normal.
(Already in 2019 the new Muslims in Congress want America to include the Islamic holidays, and, believe me, folks, there will be plenty of people who will see no problem with that.)
Yet the change affects them, maybe not directly, but maybe they will notice how that new law or rule affects someone else—but hey! They aren’t a friend, I don’t even know them! So, as long as the change does not affect me “directly” I will just go on as usual.
(Another change our new Muslim reps want is to end money for Homeland Security [or ICE, I forget which] but it doesn’t matter. They won’t get their way on that one. The Islamic holidays…don’t be surprised.)
Then another change hits closer to home. It affects a neighbor who lives just two houses down—but still, I don’t really know them “that” well, either…so I look away.
(Already I have heard one block-headed American wish a Muslim, “Happy Ramadan!” In a newspaper column another blockhead wished her Muslim readers, “Happy Ramadan!”)
So you see, it’s happening, one minor event at a time.
Finally you wake some morning thinking about “another” recent change. You go to work thinking about it—not TRYING to think about it, but THINKING about it all the way. You get to work and everybody is talking about it. But nothing can be done—because it’s DONE. One comment from a fellow employee comes clear, “Well, we just have to do what they want.”
Then, over and over, the new changes and rules arrive, until…
(In 2019, we now have 3 Muslims in the US House of Representatives, plus Muslim Keith Ellison won attorney general of Minnesota…so we’ve begun to see change…while we were sleeping.)

It’s not just islam of course, the globalists want their way, badly, and are pushing the Muslims to do their bidding, which the Muslims have readily agreed to because it’s what they want, too, it’s their hijrah, their invasion justified. Unfortunately, for the Muslims, they are just pawns doing the work of pawns.
There will be NO long-lasting caliphate. When the Muslims have the entire so-called civilized West under their control—their caliphate—then the hammer will come down on the Muslims too. (I don’t know how that would happen but certainly the elite realize that the Muslims would soon want their gated communities.)

And speaking of the elite, what is it that makes a man/woman who maybe started life being a sweet and charming child to change into a monster dead set on first changing America, then to utterly destroying it and all its ideals?
This is what we common and regular people are facing, folks. We need to learn all we can about Islam and globalism, especially how the two are interconnected, and spread our knowledge to anyone who will listen.